Vienna is divided into 23 districts – administrative areas of different sizes and with their own specific characteristics and charm. Vienna districts are both numbered and have a name, so it is easy to navigate. Their numbers are linked to postal codes, so if an address in Vienna has a postal code 1210, it is in 21st district (middle number from postal code 1210). Here is another example – 1010 is a postal code from first district – 1010.

Also, street names displayed on plates are numbered with district numbers, so if plate reads 4. Prinz Eugen-Straße, this means you are in the 4th district. This makes navigation through Vienna really easy.

Here is the list and brief info about Vienna districts with their postcodes (zip codes): 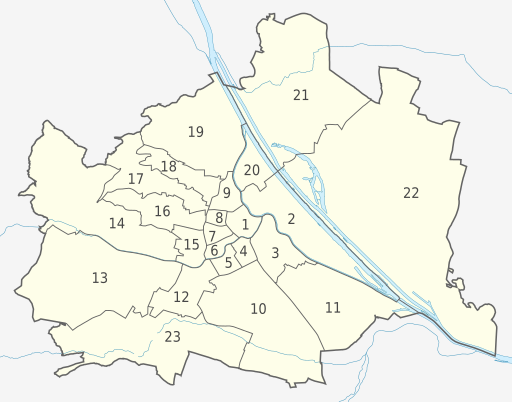 The main, central district located in the geographical center of Vienna. Home to Stephan Platz (Stephansplatz) and St. Stephen’s Cathedral (Stephansdom). The main tourist flocking area with several important landmarks and high-end shopping and dining areas. It is a part of the Old Town and has couple of pedestrian areas popular with tourists and Vienna resident alike.

Leopoldstadt is the district on the island between the Danube and the Donaukanal. It shares the island with 22nd district, Brigittenau. It is home of Praterstern, city’s busiest traffic node, and Prater Park with Viennese Giant Ferris Wheel.

Landstraße is next to Innere Stadt (district 1), right on the right side of the Donaukanal. It includes Belvedere Palace and central train station of Vienna, Wien Mitte.

Wieden is a small district in the south to the city center and includes Karlsplatz with famous Karlskirche and also the Vienna University of Technology.

Margareten and Wieden were one district until 1861. It is a small district, almost identical in size with Wieden. Famous for being a home to Austrian Society and Economy Museum, known globally for introduction of Vienna Method, data visualization method.

Neubau is another small district with shopping area, and also is a host to the Museumsquartier, a large museum and gallery complex.

Josefstadt is another small district adjacent to the Rathaus, and close to the Parliament and the University of Vienna.

Alsergrund is the last of the inner districts and it closes the circle around city center. It is the area of the General Hospital and Vienna Medical University district, and alslo Sigmund Freud’s Museum.

Favoriten is one of the larger districts with largest population so far. It is located in the southern part of Vienna. On its northern border, there is main train station, Wien Hauptbahnhof, and Vienna’s thermal spa in its southern part.

Simmering is a fairly large district, located next to Favoriten and on the right side of the Donaukanal. It includes Wiener Zentralfriedhof, Vienna Central Cemetery.

Meidling is a small district on the southern bank of the Wien river. Current Chancellor of Austria Sebastian Kurz was raised there and has private residence is Meidling.

Hietzing is on the southern bank of the Wien river, and on the west of Vienna city area. It includes Schönbrunn Palace.

Penzing was one district with Heitzing until they were divided into two districts in 1938. Located on the northern bank of the Wien river, it is famous for Otto Wagner’s Church – Kirche am Steinhof.

Rudolfsheim-Fünfhaus is on the northern bank of the Wien river and it is a small district surrounded by six other Vienna district form the area. It is a district with highest percentage of foreign-born population in Vienna.

Formerly a village of Ottakring, this western district is now a thriving neighborhood famous for its brewery and large Balkan immigration, especially from former Yugoslavia.

Hernals is the district stretching towards northwestern outskirts of Vienna. Famous churches to visit there are Kalvarienbergkirche, the Sühnekirche, and the Marienpfarre.

Währing is on the northwestern of Vienna and includes the Türkenschanzpark and University of Natural Resources and Life Sciences. There are several notable buildings/castles in this district, such as Schloß Pötzleinsdorf.

Döbling is northern district and it is one of the larger ones. It is famous for being a residence of Beethoven and it hosts Japanese Garden.

Brigittenau was one district with Leopoldstadt, until they were made two districts in 1900. Named after Brigitta Chapel, built in 17th century.

Floridsdorf is large district located on the left bank of the Danube and in the north of Vienna and includes combination of industrial and residential.

Donaustadt is on the left bank of the Danube and is the largest district of Vienna, occupying almst one quarter of city’s area. It is a host of the Vienna International Centre, large campus and building complex of the United Nations Office in Vienna and several agencies and Vienna’s largest conference center.

Liesing is the southernmost district, which is also least populated area in Vienna. It includes the Wotruba Church, an unique example of Brutalism in architecture.

This is just a brief description of each of Vienna districts. We hope this will be useful starting point in exploration of the city. We will be writing in more details as we add articles about attractions and landmarks around Vienna.

Any cookies that may not be particularly necessary for the website to function and is used specifically to collect user personal data via analytics, ads, other embedded contents are termed as non-necessary cookies. It is mandatory to procure user consent prior to running these cookies on your website.